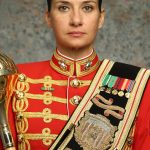 Gunnery Sgt. Preston began her musical training on clarinet at age 10. She graduated in 1999 from Perry High School in Massillon, and attended the University of Akron where she earned a bachelor’s in Music Education in 2004. In 2005, Gunnery Sgt. Preston enlisted in the Marine Corps and attended recruit training at Parris Island Marine Corps Recruit Depot in Beaufort, S.C. Following Marine Combat Training at Camp Geiger in Jacksonville, N.C., and the Basic Music Course at the Naval School of Music in Norfolk, Va., she was assigned to the Quantico Marine Corps Band in Quantico, Va. In 2009, Gunnery Sgt. Preston was transferred to the Marine Forces Pacific Band in Kaneohe Bay, Hawaii, where she earned the additional military occupational specialty of Combat Marksmanship Trainer. During her time with the Marine Forces Pacific Band, Gunnery Sgt. Preston performed for international community relations events across the globe, visiting American Samoa, Australia, New Zealand, Canada, China, Cambodia, and Mongolia with the concert band. She returned to the Naval School of Music in 2013 to complete the Unit Leader Course and was then transferred to the Third Marine Aircraft Wing Band in Miramar, Calif., where she led as Acting Enlisted Conductor and Acting Drum Major. Gunnery Sgt. Preston was chosen to attend the Naval School of Music for a third time in 2016 where she was officially selected for the billet of Drum Major. After graduating the Senior Musician Course in 2017, she served as Drum Major for the Second Marine Aircraft Wing Band in Cherry Point, N.C., and in July 2019, Gunnery Sgt. Preston joined “The President’s Own” United States Marine Band as the Assistant Drum Major.

As Assistant Drum Major for “The President’s Own,” Gunnery Sgt. Preston leads the band in ceremonial commitments and, as the company gunnery sergeant, she is responsible for unit and new member training.